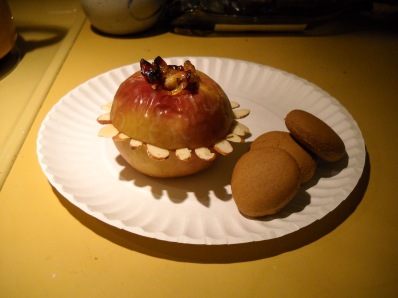 Ha. Ha ha. Ha ha ha. Ha ha *wheeze* ha *gasp* ha ha *snort*. HAHAHAHAHA! Basically I sound like this right now. I’ve just spent the last two hours in the kitchen, up to my arms in flour, molasses, and marmalade. That side of the apartment is probably 90 degrees. That’s the side of the apartment that never gets hot. The sweet aromas of cinnamon and apple swirl through the air, somehow even strong enough to cover the lovely scent of litter box nearby. I’ve done the dishes four or five times… I’ve lost count. I’ve used almost every single bowl, spoon, pan, and cutting board in my arsenal. I know what you’re expecting. A disaster. An absolute catastrophe. After all, that’s the only reason I could be laughing so hard like a nut job, right? To tell you the truth, I’m still surprised. Both creations turned out the way they were supposed to and taste magnificent.

To be perfectly frank, I overloaded my plate a little bit this week. I’ve got a reading on Saturday that I’ve barely prepared for, I had appointments to get my website’s domain switched over, I’ve been working every evening on editing the last 65 pages of Aequitas, and I have a big book-signing/reading/discussion on Tuesday to prepare for. So it might have been a bit much for me to try and take on two recipes, especially ones pulled out of a 1918 cookbook, Foods That Will Win the War and How to Cook Them by C. Houston and Alberta M. Goudiss. But, I stuck with my choices because I was assured that they wouldn’t take much time. Oh, how wrong I was.

The way these directions are written out isn’t the same as how you see recipes now. They aren’t broken down into steps, there is no prep time vs. cook time given, and there are no temperatures listed for the oven. So when I quickly gazed at the recipe for Soft Cinnamon Cookies, I assumed it would take the same amount of time that it did to cook my usual package mix of oatmeal chocolate chip cookies. No. The apple porcupines, however, didn’t take much time at all. The only difficulty I had with them was in the coring process.

I don’t eat apples enough to justify buying a corer, same as I don’t eat enough mangos to buy a pitter ( I prefer to cut them up as if they were bodies). I figured all I would need was a paring knife to get the job done. I neglected to think about the muscle strength required to core an apple, especially with such a tiny knife. I have practically no arm strength for chopping or cutting anything. But you don’t want me to punch you… just saying. The recipe also neglected to mention what cultivar of apple to use and I’m sure the choice was much more limited back in 1918 depending on where one was. I chose Empire which didn’t come into existence until 1945 and wasn’t released to the public until 1966. But they make superb cooking apples.

As I slid the knife into the white flesh of the apple, I grunted and groaned to get the blade back out. And I continued this for the next ten minutes as I cut a jerky looking circle around the core and finally pushed it out the bottom. The second apple was much more difficult than the first. I had to stop and take a break because my arm was throbbing from trying to force the knife through. The next step was to cut a line through the skin of the apple all the way around. I only cut one line on each and I probably should have done a few more. But it wasn’t necessary. Finally when that was done, I turned to the filling. The recipe is pretty wide open. It says you can mix dates, nuts, and figs (or marmalade) with some honey. I’m not keen on dates or figs so I bought dried cranberries and walnuts to go with the marmalade. The citrus and honey smell was refreshing as I scooped up spoonfuls and slid them into the apple interiors.

I checked the directions. It said to place them in a baking pan with a 1/4 inch of water in the bottom and then bake for 30 minutes. I’d started out putting them on a flat pan and quickly moved them into a different one. I scratched my head when it came to setting the oven temp. They were going to sit in there for 30 minutes. I didn’t want it to be set too high, lest they catch fire and burn to a crisp. I turned the dial onto 250, slid the pan in and set the timer for fifteen minutes. Gradually, I turned the heat up to 350, which turned out to be alright. After the first fifteen, I reset the timer for another fifteen and turned to my second recipe, the cinnamon cookies.

I read through the directions for this one several times before I actually started. What I neglected to notice last week was that there is a hefty usage of flour in this recipe. Nearly 5 cups with all the other ingredients. They then want you to roll out the cookie dough and cut little circles to place on the baking sheet. Here’s my issue: I have a problem with flour. It’s the texture. It reminds me of chalk, which in turn, reminds me of nails on a chalkboard. The rough feeling of it on my fingers causes me to shiver even now after I’ve finished the recipe. I also haven’t used a rolling pin since the last time I made pizza back in the 7th grade. This was looking to be an uphill battle already.

As I waited for the water to boil for the wet ingredients, I combined one cup  flour, 1/2 teaspoon baking soda, 1/8 teaspoon salt, 1/2 teaspoon ginger, and 2 tablespoons of cinnamon in a bowl. The recipe also asks for 1/2 teaspoon of cloves. But, when I went to the supermarket last night to get this, I was under impression that the cloves were for the apple recipe. Those little evil things which look like porcupine quills ironically cost $8 for a teeny tiny little bottle. If you want it ground, it’s $11. What. The. Hell. I bought the whole cloves. I mean, seriously! I didn’t think I needed them ground anyway. Well, actually, I DID. But I’m still glad I didn’t spend an extra 3 bucks for ground cloves. I sprinkled the little bastards on my cutting board, took the back of a spoon and smashed them into oblivion. I know I didn’t have anywhere near 1/2 teaspoon but I didn’t care. It was enough having to pick the little stems and shells off.

I sifted the dry ingredients and went to work on the wet. 1 cup of molasses, 1/2 cup of boiling water, and 2 tablespoons of oil. The recipe calls for ‘fat’ but to each their own! Then I dumped the wet into the dry and mixed them. To this I was supposed to add the four cups of flour. I continued to sprinkle it in and mix with a spoon and each time, it grew more and more difficult to mix it. At one point, I decided to get my hands in, despite my flour phobia and there wasn’t nearly enough in there to keep the batter from sticking to my hands. I looked like a swamp monster as I tried to wash it off.

Somewhere amidst the mixing, the apples came out of the oven, smelling absolutely divine.

Finally, when enough flour had been mixed, I plopped the dough on to my cutting board, kneeded it a little, and pressed it out with my rolling pin. I don’t own any cookie cutters so I snagged a shot glass and used that. That shot glass got more use tonight than it has in the last two years. I had twenty cookies on the first batch that went into the oven at 350. The directions said to put them in for 15 minutes in a ‘moderately heated’ oven. I assumed that was correct. Turned out I was right for once!

I turned back to the apples. I grabbed my bag of almond slices from the pantry and grabbed a handful. I tried to press one into the skin but it broke a part. They ended up being to brittle to puncture anywhere except for in the cut that I made around the apple. So now, instead of looking like porcupines, they look like portly ballerinas in tutus. Either that or some medieval weapon, made to throw at enemies’ heads.

I pressed the remaining dough together, kneeded it, and rolled it out once more. When the first batch was out and put on a plate to cool, a second batch took its place, this time with 25 cookies. Those just came out of the oven about twenty minutes ago. Even though I hadn’t had dinner yet, I ate a couple to test them out. Not too sweet and certainly not bland. They make an excellent tea cookie and would be great with ice cream if I had any. I could probably make my own with how insane the snow storm is outside. WE FINALLY GOT SNOW! ON THE FIRST DAY OF MARCH! WHAT!?

Both recipes turned out wonderful despite the work out I had putting them both together. I think back to the episodes of “Downton Abbey” that I was watching and wonder how Mrs. Patmore, the head cook, could pull all of those recipes off everyday. It just goes to show you though that they knew what they were doing in those old cook books. If they were as vague as that and I still managed to make everything correctly? Damn. I have HUGE respect for anyone cooking during that time period. Hell, I have respect for anyone who has to cook on a daily basis.

Brr, all of this cold weather has me wanting soup. So, next week on Cooking Adventures, I’ll be making Chicken Egg Drop Soup. If you’re in Portland, ME this Saturday evening, stop into Slainte Wine Bar and Lounge where I’ll be reading a section from my upcoming book as well as something else!

EDIT: I would just like to point out that I feel like a total moron for not noticing that my title was “deserts” instead of “desserts”. Oh dear… I seriously stare at this computer for too long…

One thought on “World War I Era Desserts: A Worthy Workout”