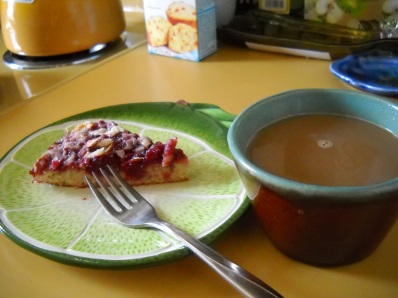 When I’ve chosen recipes for my past cooking adventures, I’ve mostly chosen them from community websites with less than reliable cooks behind them. That’s understandable. There’s no telling if something’s going to come out good or not. But when you put your trust in a recipe from a well-recognized magazine, you expect it to come out good, especially if you’ve followed all of the directions! So, when my cake came out of the oven looking like a bloodied battlefield with raspberries that looked like decapitated heads littering its surface… I looked at my Taste of Home magazine, growled, and uttered, “Heads will roll for this.” I’ve also met my arch-nemesis in a kitchen utensil that must be wielded with extreme care. Even looking at it the wrong way might cause it to attack. The name of this arch-nemesis is Matilda.

This recipe required me to buy a round baking pan. You’d think I should have something like this. It’s an essential. But no. Past baking adventures have prevented me from trying very much and so I haven’t had the opportunity to use one. I bought a nice 9 inch baking pan, made by Calphalon and gleefully returned to my kitchen with anticipation of making my coffee cake.

This morning I found myself rolling out of bed at 4:45. Why? Because it’s 80 degrees outside. My room was so sticky and hot that I just couldn’t catch another wink to save my life. I had to get up. It’s March, people. I live in Maine! Thanks, Global Warming. I’m sure nature is having a freaking field day trying to figure out exactly what’s going on… I shouldn’t complain really. I’d prefer it to be warm rather than icy. Anyway, it wasn’t until about 8 that I found myself in the kitchen with ingredients assembled and ready to start in.

The first directions for the coffee cake are to mix 1 cup of fresh raspberries with 3 tbsp. of brown sugar. I pulled my fresh raspberries out of the fridge and plopped them into a bowl. Then I turned to my brown sugar and with horror, realized that the entire thing had hardened. Which makes measuring it out a real bitch. I ended up just pulling out large hunks of brown sugar and dumping them in with the raspberries, thinking “Well that looks like about 3 tablespoons…” Unfortunately, this doesn’t help you mix it all together. I decided I’d add a little bit of warm water to it and then prodded the pieces of brown sugar with a fork, hoping to mash it all down. What resulted was a red raspberry lake with mini chunks of brown sugar floating in it. I mixed this stuff for about 5 minutes before I got fed up and put it aside.

Next, you mix 1 cup flour, 1/3 cup sugar, 1/2 teaspoon baking powder, 1/4 tsp baking soda, and 1/8 tsp salt. This all went very well… except for the part where I dumped a ton of the baking powder in the sink by accident while trying to measure it out. In a separate bowl, I cracked an egg and whisked it with a fork. Then I added in the 1/2 cup sour cream and the 1 tsp vanilla extract. I hadn’t heated the butter ahead of time so I yanked it out of the fridge, cut the 3 tbsp out, heated it in the microwave and poured it in. Then I added this to the dry mixture. Now the directions tell you to stir it until the dry ingredients are “just moistened”. So I mixed. Or at least, I tried to. You see, they weren’t “just moistened.” There was practically no moisture to this at all. In fact, there were still dry ingredients in the bottom of the bowl that wouldn’t mix with the others, like anti-social children on a playground. (I was one of those children…) I decided that I needed to add some more butter so I added another tablespoon. And apparently, that was too much. Because now, instead of being “just moistened,” it was sticky. I think I threw down the spoon and said, “WHATEVER!”

Then, you are supposed to spoon half of this “just moistened” mixture into the bottom of an 8 inch round baking pan. I pulled my 9 incher out of the cabinet. Whoops. As I washed the thing out, I thought, ‘Seriously!? It’s one inch off. How badly proportioned could it be.’ I answered my question a couple minutes later after greasing and flouring the blasted thing.

Half of the batter was supposed to coat the bottom of that thing. Want to know how much I actually used? Really, take a guess… that’s right… the whole damn bowl of batter! And that was barely enough. Even if I had an 8 inch cake pan, it wouldn’t have been enough to split the batter in half. Which means that someone in the Taste of Home magazine needs to experiment a bit more with proportioning!!! Spreading the thing out was ridiculous, too. I had to use 2 spoons so that I could scrape the batter off of one and then the other. In all, this step probably took 10 minutes on its own.

Then came the raspberry pool. Oh man. Talk about drowning the batter… It looked just awful. They wanted me to be able to put the other half of the batter over the raspberry layer. Besides that being practically impossible with that glue-like batter (which we will now refer to as the glatter), there obviously was none left to accomplish this task. So instead, I decided that I would sprinkle some more brown sugar over the raspberry in hopes of soaking up some of the juice. I have tried doing this before with other recipes and instead of realizing that it wasn’t going to work, I did it anyway. With disappointment weighing heavily on my shoulders, I turned the oven to 350. Then I dipped my hand into the bag of almond slices and sprinkled them over the top of the raspberry-coated glatter before sticking the pan in the oven to bake for 30 minutes.

I quickly did the dishes and turned my attention to the Coffee Caribe. Why, oh, why did I have to choose a coffee recipe which involved so much grinding, grating, and potential injury? The recipe has you combine 4 tbsp. of ground coffee, 1/2 tsp. of grated orange peel, 1/4 tsp of cinnamon, 1/8 tsp of ground cloves, and 1/4 inch of a vanilla bean. Well, as you’ve probably already assumed, I had some trouble.

Grated orange peel. The words are now deathly reminders in my memory of this experience. I ate an orange a few days ago, kept the peels, and dried them out for this. But when the time came, it occurred to me that I didn’t have a traditional grater. I had a mandolin with a grater attachment but I wasn’t going to haul that huge thing out and set it up just for a couple tiny pieces of orange rind. Then I found this, a Christmas present from my mom. 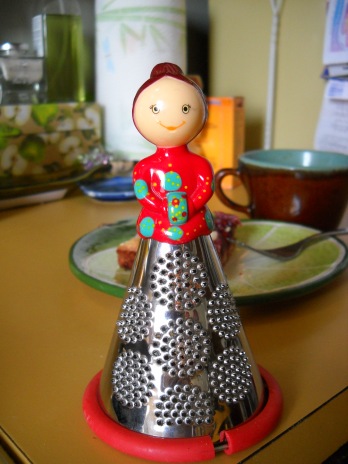 Matilda is a demonic grater. Her two little black eyes gazed at me with ill-intent and that tight little bun atop her head wrenched her face back to give her that deceptively sweet smile. She even has her own theme song. I took up the orange peel and began scraping it along the grater. This was all well and good. The grater worked for the most part. It worked well right up until I needed to clean it out so that I could keep grating. How does one exactly clean this thing? I tried everything. Even a paper towel… which was the stupidest idea ever! I tried brushing it out with my fingers and succeeded in cutting my fingers. I know. Don’t start. Finally, I snagged my potato brush and ground it into the holes until every last speck of orange was gone. At this point, I wanted to throw Matilda across the kitchen but instead, I stuck her head first into a mug of murky water in my sink, hiding her cruel smirk.

Next was the cinnamon. No problem. Then… the cloves. As you may recall with my sweet cinnamon cookies in my World War I Era desserts, I had some issues grinding the cloves. I discovered this time, however, that it’s really not that difficult. And I had made it as tough as I possibly could have last time. I took a clove and simply crushed it between my thumb and forefinger. Instantly, the clove crumpled into dust! INCREDIBLE! I preceded to do this with a couple more. Then, I threw all of it into my Magic Bullet container. Another issue arose. I couldn’t for the life of me find the blade attachment to screw on. I looked high and low for this thing. Probably for a couple minutes. Then I discovered it was sitting in the magic bullet already. Sighing, I blended the ingredients, the sound like a chainsaw ripping into the quiet morning air. Then, I dumped the ground mixture into a coffee filter, added water to the machine and pressed the ON button.

The timer went off for the coffee cake and I hefted the thing out of the oven. The glatter had risen a little but not very much. The raspberry still dominated the surface, little white almond slices jutting up like dangerous stalagmites. The recipe also calls for you to make icing. 1/4 cup confectioners sugar, 1 1/2 tsp of milk, and 1/4 tsp vanilla. It was during this stirring that I got a loud and unprecedented knock on my kitchen door which caused me to swear loudly in surprise. And who should be standing outside on my deck but a sweet old man delivering a church pamphlet for Easter Sunday.

After I’d recovered from my guilt, I returned my attention to the frosting and drizzled it over the cake. Then I cut free a piece, poured a cup of my new coffee and sampled them. There’s not really much cake to speak of. It’s essentially just gelatinous raspberry with crunchy almonds which sticks to your teeth. The coffee was good but not very amazing. Hence the title: MTTIW. More Trouble Than It’s Worth.

Next week on Cooking Adventures, I’ll be taking a friend’s advice and doing a Sausage Frittata! Stay tuned!