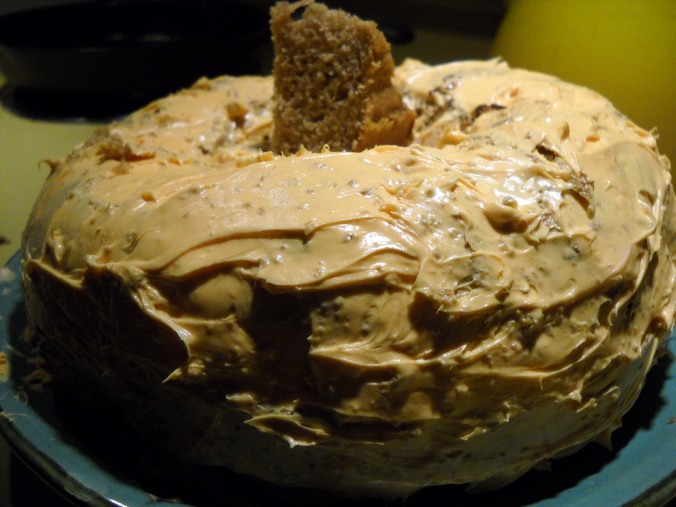 Now, before we begin, there is something you need to know. At the conclusion of this adventure, my friend, Celena, and I have decided that whoever made the original cake, the one that’s perfect with absolutely no frosting errors, must have cheated somehow. They had to have been a professional cake baker. Because the directions for making this thing are beyond easy… for the most part. But seeing just the four pictures and having no directions to go on is a little iffy, too. And that’s what we were working with. The tale that follows is a real account of the frightening and haunting experiences that happened to Celena and I on that fateful night of the Great Pumpkin Cake. Don’t get scared now.

The adventure started late in the evening after a hefty dose of pizza and cheesy breadsticks. After all, one cannot go on such an epic journey without proper sustenance. We moved into the kitchen and began the process of making the cakes. These were boxed spice cakes which, honestly, are so much less of a hassle than making a spice cake from scratch. And since I know I don’t have enough flour for that task, I’m glad that we did it this way. We did, however, have to use 3 eggs per cake! That’s kind of crazy. This particular cake also called for a 1/2 cup water and 1/3 cup vegetable oil in addition to the powdered spice cake mix. And because I didn’t learn from my owl cupcake episode, I decided to mix the cake mix by hand yet again. And, as to be expected, it took a while before all of the lumps were out.

Now, in order to achieve the perfect pumpkin-esque look, the directions tell you to use a bundt cake pan. So, after oiling the bottom and sides of the pan with some vegetable oil, I poured the bowl’s contents into the batter pan. Then, there came the awkward moment of not being able to get the rest of the batter out myself because I hadn’t pulled out the rubber spatula. If I’d tried to go for it, batter would have spotted my kitchen floor. Celena took up the rubber spatula wand and pulled the remainder of the batter out with it.

Then the cake went into the oven at 375… for 38 minutes. Yeah. Had I actually bothered to look at the box beforehand, I might have known to do one of the cakes before Celena got there, if only to save us some time. I also only have one bundt cake pan, so, you guessed it, we had to wait for the first one to be out of the oven before we could bake the second cake. While the first one baked, we made up a second batter. The first cake came out, scenting the kitchen in such a way that I almost felt 10 pounds heavier. After the cake had cooled a bit, I took a knife and began cutting along the sides of the pan to try and loosen it so that it would pop out. After all, it was a non-stick pan and I’d added oil to the bottom… so it should have just come right out. Except it didn’t.

After another round of cutting, the cake finally dropped onto a plate. Patches of the bottom were still stuck to the pan. I growled angrily, realizing that trying to cover that up with frosting was going to be interesting. We moved onto the next cake, pouring the batter into the pan… forgetting to oil it, and then putting that in the oven. As we waited for the cake, we watched Jim Gaffigan, Kevin Pollak, and other comedians. Finally when cake 2 was done, we rolled up our sleeves and returned to the kitchen for the final showdown.

As cake number 2 cooled, I went about trying to cut cake number 1. Now, I’ll be clear on something. The “directions” were basically just four pictures showing the basic mechanics of how to put the cake together. However, specific directions couldn’t be looked up because the website from which the pictures originated had gone kaput. So, we were left to imagine how best to do it. I took my bread knife (which is one of my favorite items in all the world) and slowly began carving through cake 1 with it putting it right on the middle seam. I should have probably just taken a little bit off the top. But like a deranged barber, I hacked a huge portion off and was left with an uneven thin chunk of cake for the base of the pumpkin. Not learning from the first one, I proceeded to do the same with the second. The second bundt cake also didn’t want to come out of the pan and left behind even more cake bits when it reluctantly let go.

That was my cat… leaping onto the keyboard. And as you can see, even he has a sense of humor, judging by the smiley face he just typed…

What was I saying? Yes. Orange frosting. Not the easiest color to make. Celena started out with an even amount of orange and yellow drops and ended up with something more light pink than orange. From this point on, she kept adding yellow. The cake got more and more orange as she went on until finally we reached this very light orange sherbet color. Knowing that was probably the best we were going to do, we spread it onto the flat section of the bottom cake and then put them together.

Now, the moment of truth, frosting the rest of the cake. How easy they make this look in the photograph. Let’s be honest though. If you are frosting a cake within thirty minutes of it being out of the oven, chances are that the cake is going to crumble and break apart once your knife touches its surface. This is exactly what happened when we tried to frost the cake. And because orange sherbet isn’t exactly a dark color, all of the imperfections were easy to see. We smeared and dabbed at the cake for a good ten minutes, making sure to cover every inch of it, trying to hide what we’d done. In the end, we decided when enough was enough… and actually ran out of frosting, too.

Now what we had resembled a large donut. Because its a bundt cake pan, there is a giant hole in the middle. So we took pieces of the cake that I’d sliced away and stuffed it into the hole in hopes that it would seem less like a breakfast pastry and more like The Great Pumpkin! And then, there came the brilliant notion that we still needed a stem. Celena’s idea: use a banana dipped in chocolate frosting.

One cannot dip a banana in chocolate frosting as I soon discovered. Especially if the chocolate frosting has been in the refridgerator for a couple days. Also, banana’s apparently don’t allow any kind of foreign object to stick to them, least of all frosting… (a sentence you will never see again, I’m sure.) So while trying to frost this banana, I was holding it in my fingers with one hand and trying to swipe frosting onto it with a knife in the other. When I thought I’d gotten enough chocolate frosting onto it, I stuck it into the smooshed cake in the middle. Folks… that was the saddest thing either of us had ever seen. We were literally laughing for minutes, neither one of us could breathe. After a unanimous vote that we couldn’t let the world see that, I removed the banana. Instead, we used another section of the cut away cake cut in a triangle for the stem and didn’t frost it because… we couldn’t see that going very well.

So… the Great Pumpkin Cake turned out allot better than what I’d expected, based on my abilities in baking. The cake is off to work to be enjoyed by our fellow Sportians. Hopefully they will never have to know how much trouble it took to make…

Next week on Cooking Adventures, I’ll be making Apple Cider Caramel Cookies for some readings I’ll be doing at both the Camden and Rockland Public Libraries. My apologies now if I’m not able to get posts up on time next week. In addition to still getting things ready for the reading, I am trying to finish up the layout for the paperback copy of Book 2. Under such extreme deadlines, and working full time in between… and not sleeping… I’m slowly losing my sanity. Let me know if you find it. I could use it back.

2 thoughts on “The (Not So) Great Pumpkin Cake”