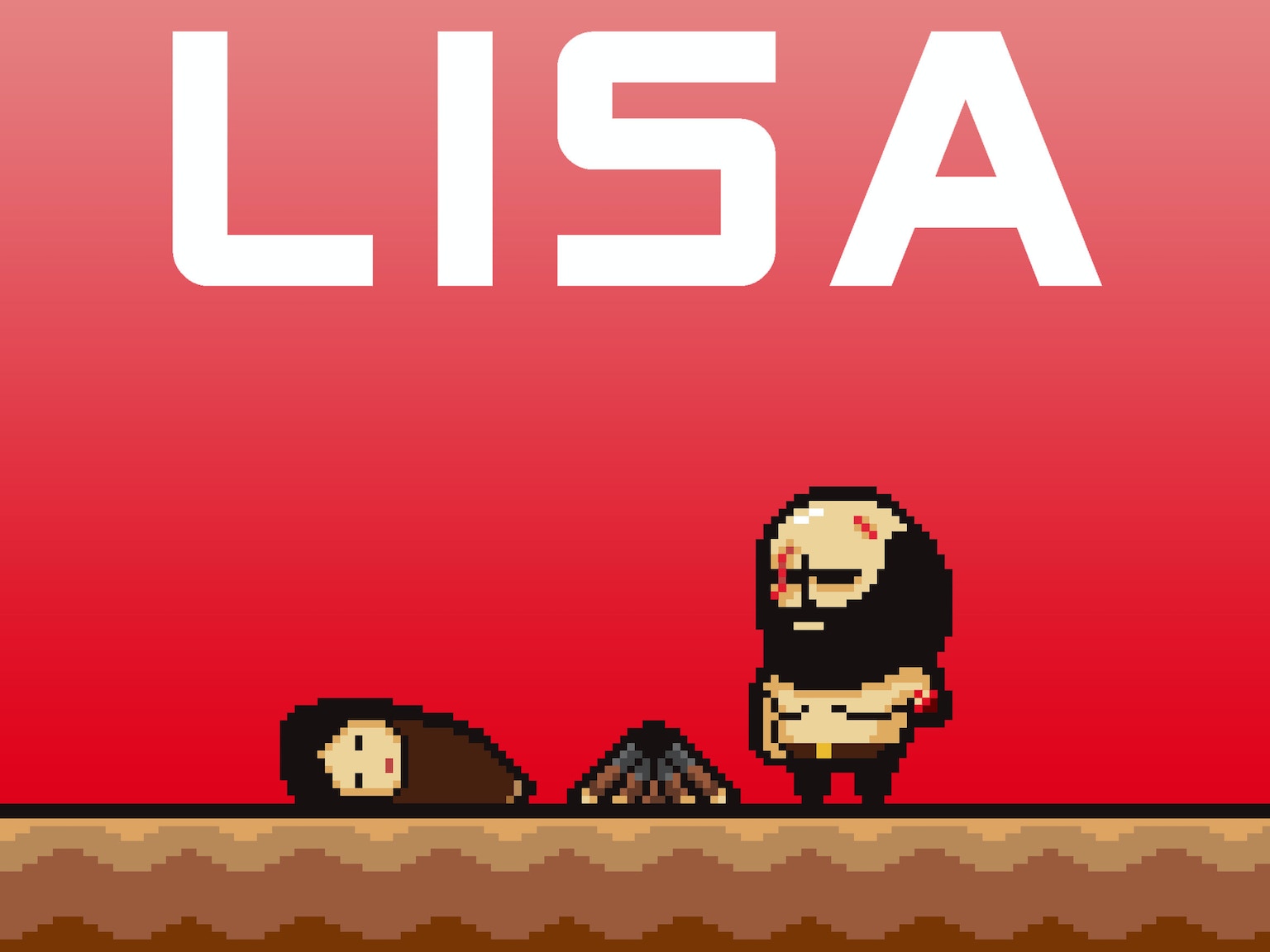 Imagine you live in a world where all of the women and children have ceased to exist, where the land is teeming with gangs of men, some depraved, some violent, others just trying to find a place to hide, and remember the world the way it used to be. This is the world of Olathe in Lisa: The Painful RPG, created by Dingaling Productions a.k.a. Austin Jorgensen. In the game, we follow the story of Brad Armstrong, a down on his luck ex-martial arts teacher who has survived in the post-apocalyptic land of Olathe alongside his childhood friends. One day, he comes across a baby lying on the ground, but not just any baby; a baby girl. Realizing the implications of finding the only girl left in their world (and trying to atone for a mournful event in his past that involves his loathsome father, Brad brings the girl home and raises her. Eventually, word gets out about Buddy (the girl’s name) and she is taken from Brad. He sets out to find her and therein begins the strange, beautiful, and often times, perverted story of his quest to find her.

I first want to say that I’m impressed that this is all the work of one man, from the artwork to the music to the gameplay and story, Jorgensen has created a deep and dark universe that is as believable as it is quirky. Through out the game, the protagonist encounters others who have found unconventional and sometimes hilarious means to survive and will join Brad’s quest to find Buddy. My favorite of these has to be Terry, the game’s tutorial in character form, who Brad saves from an ankle-biting dog that has chased him up a tree. Terry has left hints across the world for you to find, signed affectionately with his numerous nicknames. There is also Nern, a storyteller, who ambushes the character a number of times to relay pointless tales about his dead wife (God rest her soul!). There are about 30 characters the player can come across and recruit to their party through out the game which makes for unique and varied gameplay depending on who you put in your top 4.

The music is a highlight in Lisa, composed by Jorgensen under the name Widdly 2 Diddly. The game features a lot of electronic battle beats which quickly become favorites to listen to as well as some slower and easier going travel themes, the best of which (in my opinion) is “Summer Love“. Since the game is wacky, it would make perfect sense for there to be some music on the soundtrack that hilariously defies explanation. The scenes that accompany them in the game are just as goofy and unexplained. “Work Harder” plays as Brad visits a gym where several characters are listening to it and working out (some using barbells, others lifting fridges, etc.). There’s also Brad’s haunting theme (Bradley) which offers a more desolate and stark atmosphere to his inner struggles.

The game is not without it’s darker and more serious undertones. It’s the part of Lisa: The Painful that makes it that much more fantastic and well-developed. The game deals with powerful themes such as masculinity and feminism, rape culture, physical and emotional abuse, survivalism, friendship, sacrifice, family, and addiction. Through out the game, the character picks up Joy, a drug that numbs the user and forces them to act single-minded, often stirring up memories of the past along with it. Hopeless inhabitants of Olathe have taken Joy in the wake of the Flash (the event that started the apocalypse), and have been transformed into hideous mutants as a result. You fight a number of these as you progress through the story. You also have the option of whether or not to take Joy.

All in all, Lisa: The Painful is well-executed, dark, fun, and at times, heart-wrenching. It is part of a trilogy made by Jorgensen that includes Lisa: The First (a prequel to Brad’s plight) and Lisa: The Joyful (which focuses on the aftermath of Painful). I recommend picking up The First if you want to understand more of the backstory (although you can play Painful without necessarily needing to).

Want to purchase it on Steam? Here is the link!

Want some of that freaking amazing music, too? Give it a listen here!