I am very particular about my horror. I’m not always a fan of gory films, books, and games. I usually avoid many of the cookie-cutter slasher types, and the bad excuses to parade around guts and blood. I do, however, really enjoy a good psychological horror where the protagonist isn’t entirely sure that everything their seeing is real.

I was introduced to a game called The Cat Lady a few years ago, made by Harvest Games, and immediately fell in love with the story, the protagonist, and the overall feel of it. Not too long after, I discovered their first game, an indirect prequel to The Cat Lady, titled Downfall. It follows the story of Joe Davis, a troubled man who has taken his wife, Ivy, on an impromptu romantic getaway to the Quiet Haven hotel. After a falling out and a twisted dream, Joe awakens to discover that Ivy has disappeared and that Quiet Haven is not all that it appears to be. That’s where the game gets really, really good. The game follows Joe through the mysterious rooms of Quiet Haven, into places that seem more nightmare and dream than real. Behind it all lurks the mysterious entity of Sophie, a creature who Joe must kill four memories of in order to save Ivy. 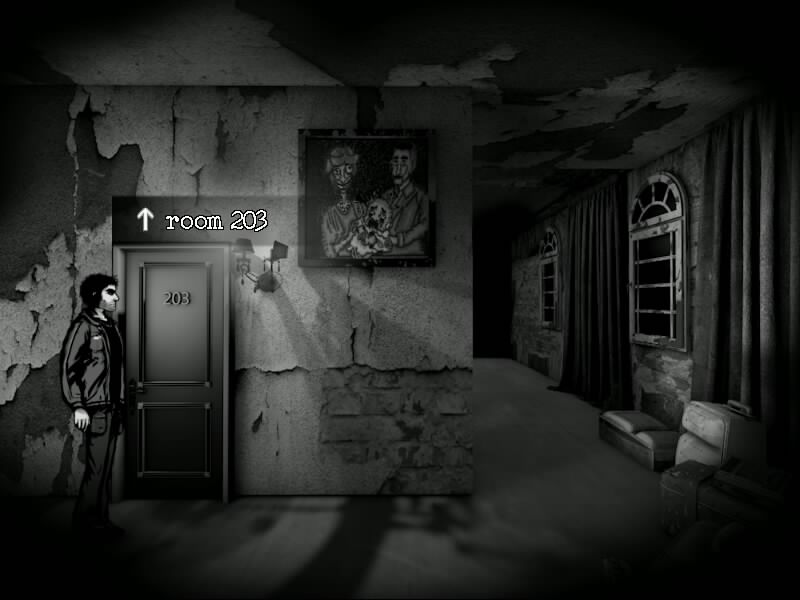 This game is twisted, bleak, and pitch black.  The black and white (with splashes of color every so often) makes for an even more dispiriting atmosphere. The game’s creator had a lot of fun including weird and disquieting art along Quiet Haven’s walls, coupled with cracked and peeling walls, water-stained ceilings, and crumbling architecture. The world seems to be falling apart the further Joe is drawn into the hotel’s madness.

Along the way, Joe makes the acquaintance of a girl named Agnes who brings humor, wit, a bit of spunk, and a dash of innocence to the game. As Joe progresses, he’s asked to do things that are considered unethical and morally horrible. She serves as a compass, our everywoman who is sharing the journey with him, and questioning his (and our own) sanity as we continue along.

One of my favorite things about Downfall has to be the music. With very similar pieces to The Cat Lady, Downfall’s score by micAmic is haunting and, for the most part, ambient. In only a handful of scenes are we given an enigmatic piano solo or a dose of hard rock, both which match the scenes brilliantly. Having music that blends with the scenery makes it that much easier to lose ourselves in the story and become fully immersed. In the way that I enjoyed Martin Stig Andersen’s score for “Limbo” and Mikko Tarmin’s for “Soma”, I have to say that Downfall will probably end up being a soundtrack that I listen to often for writing inspiration.

Curious about the game? Check out letsplayer, HarshlyCritical, and his playthrough of the Downfall Remake here.

Want to buy the game for yourself? Here’s the website at Screen 7.