Hello! Remember back in January when I said I was hoping to write all kinds of new Cooking Adventures this year? Well, that hasn’t exactly happened. It doesn’t mean that I haven’t been cooking new and exciting things in my kitchen, it just means that not all of them have been worthy tales to tell on the blog. And I’ve been busy; super busy. But I’m not going to get into all that business now. Instead, I’ll tell you the horrifying tale of trying to make this blasted grapefruit pound cake.

Now, the first thing to keep in mind is that this pound cake is delicious and was well worth all the effort it took to put it together. I’d found the recipe on Pinterest not too long ago and was interested in the idea of making some kind of dessert/breakfast crossover that didn’t have any chocolate. My hope was to give my parents some of it and neither of them eat chocolate.

The original recipe comes from FakeGinger. Thank you to Amanda for sharing the recipe with everyone.

The first step is, of course, to preheat the oven, which is generally never an issue. In the past, I’ve had a tendency to store bakeware in the oven and have inconveniently forgotten about said bakeware while preheating. This time, I was all set and ready to go. Problem was that I didn’t finish mixing the batter until long after the preheating stage was done. So, we could say that the best thing I did was preheat the hell out of my oven.

It was about this moment that I realized I was missing crucial ingredients for my pound cake, namely cream cheese and butter. Both were things I’d meant to pick up at the store the other night and forgot the night before. So, I turned off the oven and drove ten minutes to my hometown to buy groceries. Once back at home, I got into doing something else and wasted about an hour reading in another room before deciding that I should probably get back to the recipe. I once again started the oven, and moved onto the first step.

I didn’t have enough.

This was shortly followed by the realization that I’d have to go out…again and get more.

I also realized that I was almost out of gas in the car. This journey had me all over the place in search of fuel and flour and by the time I got home, it was now two hours after the initial idea of doing the recipe. At least now I had all of the ingredients.

After preheating the oven for a third time, I could finally move onto making the damn cake. And what do you know? The entire process of making the cake went off without a hitch. I didn’t have any other problems the entire time.

Those of you who have been following Cooking Adventures for a long time know how much bad luck I have in the kitchen. I’ll admit, it’s taken me five years, but finally, I think my cooking and baking is getting to the point where those silly mistakes are becoming less and less prevalent.

It’s also probably why you haven’t seen too many of these posts in the last year or so.

Could it be that I’m actually getting better in the kitchen?

Time will only tell.

But seriously, you should all give this recipe a go. It does take a bit of time to prepare the batter, but like I said, it’s well worth it. The only thing that I might emphasize is the use of a finer grater than the one I used when grating the grapefruit zest. I used Matilda (Yes, I still have her. For those of you who are unfamiliar, stare into the deathly cold gaze of the thing in the picture below…) and the zest ended up having a kind of bitter taste that didn’t work well with bigger pieces. 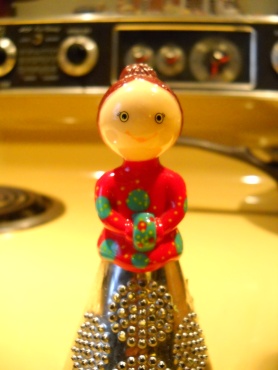 That being said, I release you to the kitchen to give this one a try for yourselves. Stay tuned for an update this weekend on how things are going otherwise here, and hopefully, it won’t take me too much time to bring you another one of these Cooking Adventures.