Day 8: Movies You Never Get Tired Of Watching

All of us have a list of movies we can watch over and over again and never grow tired of. They are movies that we connect with on an emotional level. The move us, impress us, and make us want to come back for more. And (for the most part) everyone has a very different list. A lot of the films on my list have not changed in years. Today, I’ll be sharing my top ten with you. 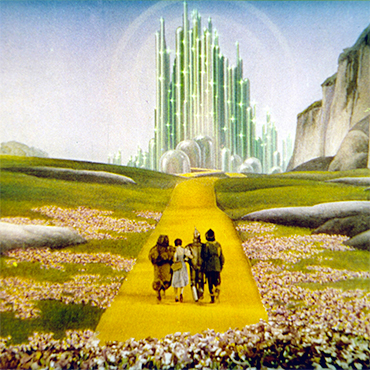 Even the main title music makes goosebumps rise on my arms. I love, love, love this movie. It’s been my favorite film ever since I was a kid. It was always the one I’d rent repeatedly from the video store up town and the one I still never get tired of no matter how many times I watch it. There is only one person I’ve ever met that has not seen this film. It’s a time-honored beautiful tale of imagination and friendship and recognizing the blessings that one has in their life. And it’s chock full of wonderful music. I used to remember all the lyrics to all the songs in this film; that’s how obsessed I was.

I know; a total 180 compared to movie number 1. I can’t help it though; Jaws has and will always be my second favorite film and one that I’ll be able to watch no matter what. It’s one that I’ll put on in the background when I’m cooking dinner, or if I’m doing something like taxes or cleaning. I know the whole movie by heart and find myself repeating notable quotes from the film alongside the actors. Funny enough; Jaws was the other film that I used to rent (probably when I shouldn’t have been able to) as a kid over and over. I was never really scared of it, but I’m pretty sure it is what started my love for sharks. Thanks Steven Spielberg and Peter Benchley. 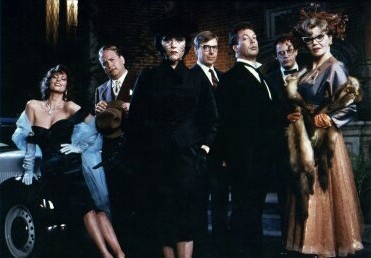 Still one of the funniest movies I’ve ever seen and one that I watch every year (sometimes multiple times during the year) because it’s so brilliant. Every actor or actress in this film plays his or her part to a t, especially the amazing Tim Curry. Not only was the concept and writing amazing, but the music was also a perfect compliment to everything. The film has three different endings! How sweet is that! I’m a little sad to discover that there is a remake happening of this. It could be a decent one…but it won’t be the same as the original and probably shouldn’t be. I hope that it at least gets some people to watch the 1985 classic and discover (or rediscover) this true gem. 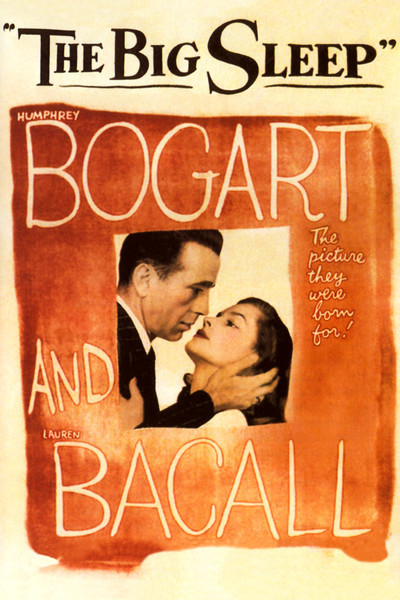 Honestly, it’s hard for me to choose ONE Humphrey Bogart film to go on this list when I love so many of them. Casablanca, Key Largo, The Maltese Falcon, Sabrina, African Queen, Treasure of the Sierra Madre, To Have and Have Not, and Dark Passage… There are so many of them that I watch over and over on that list. My favorite of them will always be The Big Sleep. It’s Bogart and Bacall’s second film, a romantic thriller where Bogart is hired as a private detective to try and stop a blackmail scheme for a wealthy and well-to-do family. What really puts this up above the rest for me is the dialogue. It’s so quick and funny and amazing in some scenes. I think among my favorites is the telephone conversation between Bogart, Bacall, and the police. Watch this and you’ll get just a taste of why you should see this film as soon as possible.

Holy shit… This is one of the funniest films I’ve ever seen and I can watch it so many times without ever getting tired of it. The whole premise of the film surrounds a funeral for the patriarch of a family in England. Son, Daniel, is in charge of saying the eulogy but is continuously upstaged by his renowned novelist brother, Robert. As all the characters gather for the funeral, Daniel notices a certain person who he doesn’t recognize hanging around. This person holds a secret, one that could jeopardize his late father’s memory and put the family further in debt to keep it quiet. What follows is a hilarious and bizarre series of events that will have you howling with laughter. What’s even better are the bloopers at the end. Seeing these guys crack up when they have to keep a straight face through it all is amazing.

Steven Spielberg is one of my movie director favorites. Michael Crichton is one of my absolute favorite authors. And together, they are responsible for this fantastic part of my childhood. I’m a sucker for re-reading the original novel by Crichton. The film is a slightly different story with slightly different outcomes but all in all, it is still one of the best-made adventure films from the 90’s and is one that never gets old. It is also, in my opinion, the best of all of the Jurassic Park films. There is something to be said for choosing actors who are not renowned as action heroes and putting them in the middle of a horror-like situation, say a dinosaur zoo that has just lost all of its electricity. You identify with these characters more and the story becomes that bit more realistic to you. It’s also a nice blend of science and realistic action sequences. Kids hiding from velociraptors in the kitchen? Scary as all hell. Christopher Pratt motorcycling through the jungle with four trained velociraptors beside him? Eh. (Sorry, guys. That part of Jurassic World wasn’t good for me.) 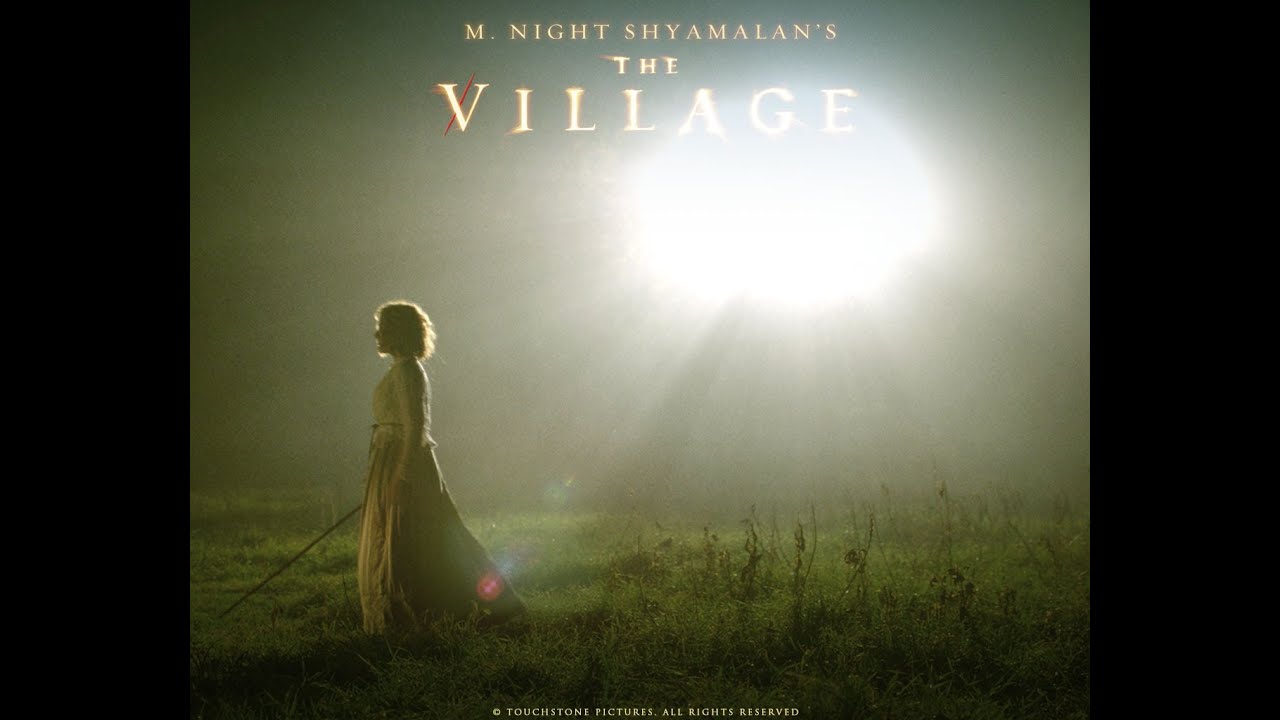 The Village is probably one of M. Night Shymalan’s most debated films. I think what people don’t understand about the movie is that it isn’t the horror film that was being marketed to audiences; it’s a love story with horror elements. And it’s one of the best movies I’ve seen in that regard. The Village is about a group of people who have gathered and live in a clearing that is surrounded by woods. In those woods are an entity only called “Those We Do Not Speak Of” which will punish any villager who steps into their territory. In the midst of this village are unlikely couple Lucius and Ivy, drawn together by a quiet love and curiosity for what lays beyond the forest. If one watches this movie with no expectations of it being a horror film, it’s one of the most enjoyable films. The dialogue is thoughtful, the music absolutely beautiful, and the plot engaging and heart-rending. And I’ve watched it time and time again without getting tired of it. 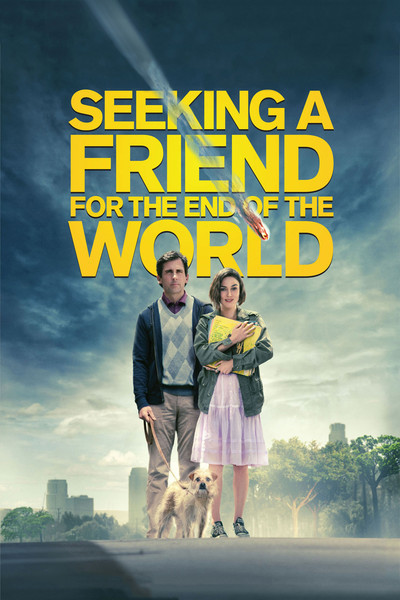 (immediately bursts into tears) What a beautiful film. I might not seem like the person who enjoys romantic films…but I do. Truly romantic films, not like Fifty Shades of Ick. Seeking A Friend For The End Of The World is one of those films that is a journey you want to watch over and over. How Steve Carell and Keira Knightly grow closer and closer as they go through their adventures is the best thing about this movie and the ending… Gets me every time. I wrote a road trip novel a few years ago (a year after this came out) that had some romantic elements to it. I hadn’t seen this film at the time but I love that there are some similarities between the two of them. If you happen to be interested in said book, take a hop over here and check it out.

Got to say it. This is a phenomenally written flick. I saw this film when I was 15 (I had AMAZING access to the video store up town from where I lived. The lady who worked there would let me rent stuff she thought I could handle, which was kind of nice). Since then, it’s always been in my top ten. Kevin Spacey (who I USED to respect until all that terrible stuff came out about him) leads a U.S. Customs agent through a bizarre but believable story of how he and four other criminals fall in together and are recruited by one of the criminal underworld’s most notorious mastermind’s to commit the ultimate heist. It’s one that I can watch over and over and still enjoy for it’s magnificent story. 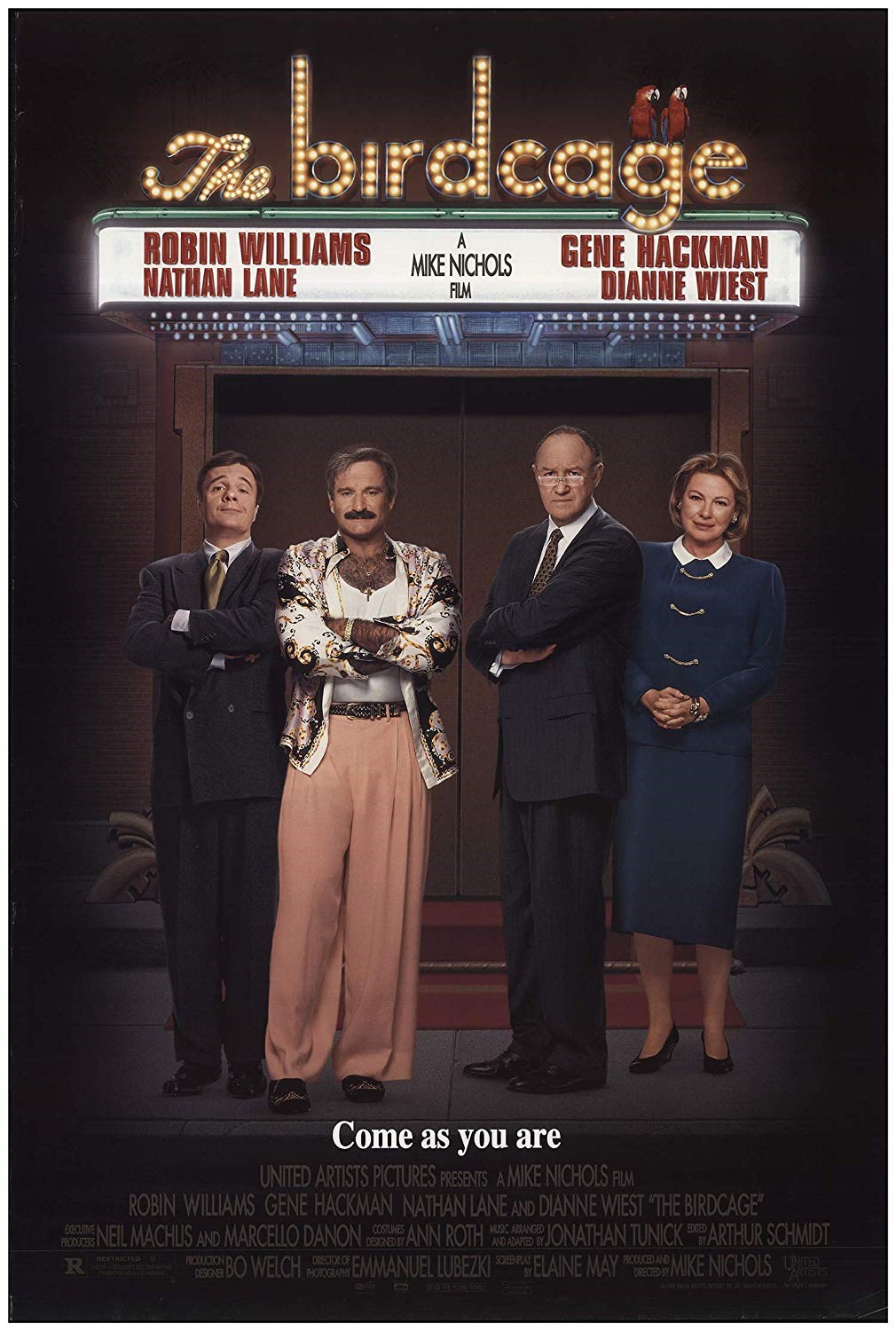 Let’s be honest? We watch movies that make us laugh and feel good and this is, above all, one of the funniest films I’ve ever seen and it never gets old. Robin Williams, Nathan Lane, Gene Hackman, Diane Wiest, and others absolutely kill in this film about a drag club-owning gay couple in Florida whose son has come home to tell them he’s engaged to be married. The girl in question’s parents are a senator and his wife who are caught in the middle of a political scandal and are unaware of Williams’ and Lane’s business nor their relationship. In order to trick the senator and his wife, an elaborate hoax is planned in order to try and convince them that they, too, are a respectable wealthy heterosexual couple. One of my favorite parts of this movie is Hank Azaria’s portrayal of Williams and Lane’s manservant, Spartacus. Definitely a must-see.

Well, that’s probably going to be my last 30 Day Challenge post for February which I knew would be a challenge. Be that as it may, I wrote 8 more blog posts than I usually write in one month and I’m happy with that. I do have a Cooking Adventure that should be coming relatively soon and possibly a Writer Thoughts Thursday post for next week. On Thursday this week, I’m planning to go see the film version of Jeff Vandermeer’s book, “Annihilation” and plan to give a review/book comparison on it soon after.