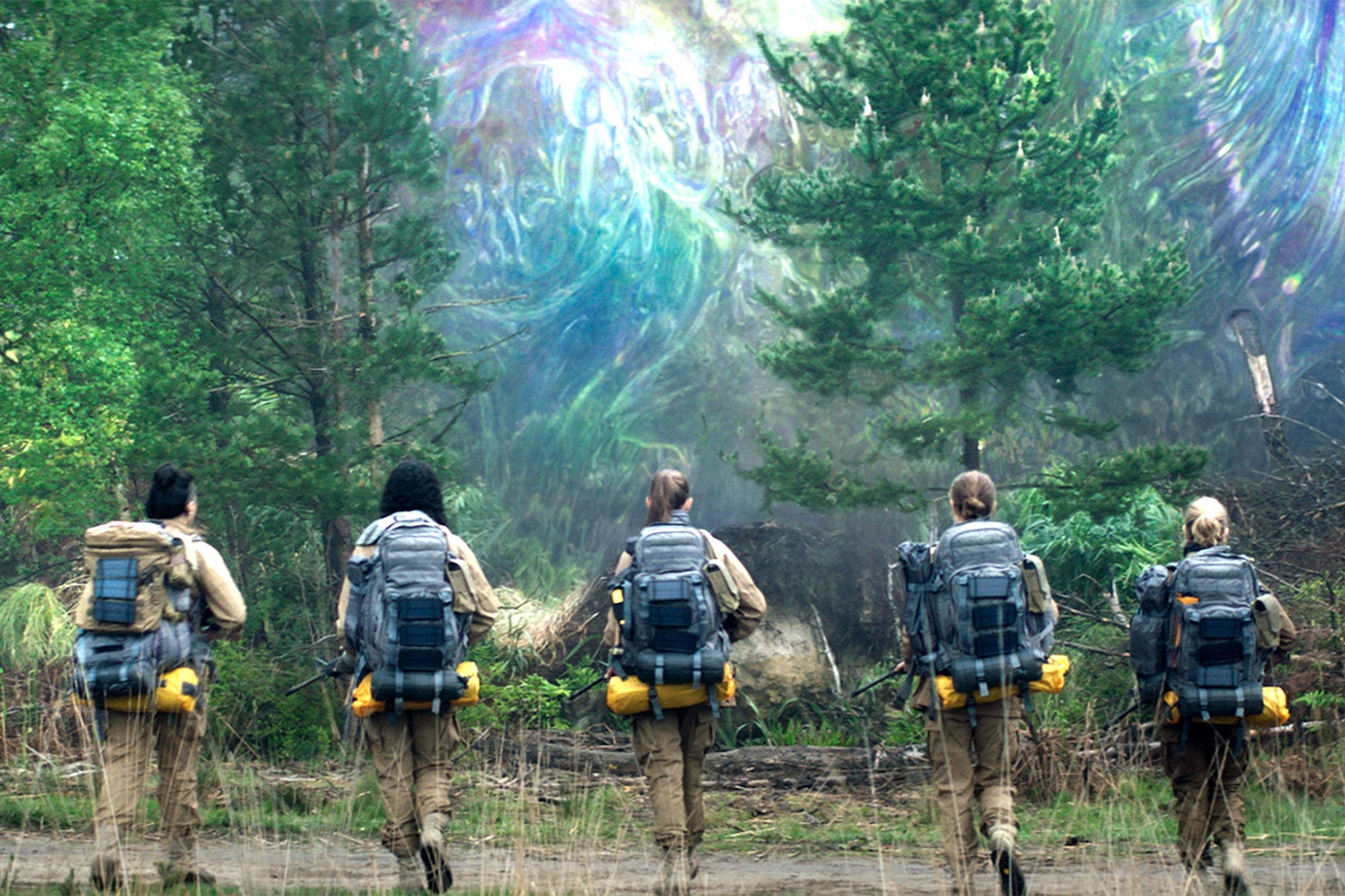 For someone who absolutely loved the intelligent, slow burn that is Jeff Vandermeer’s Annihilation novel, I had a hard time swallowing Alex Garland’s film version which recently hit theaters. I spent the better part of two weeks thinking over the similarities between the two because, let’s face it, they are almost two different stories with only a couple of shared aspects between them. Garland had intended Annihilation to exist as its own entity which almost begs the question, why not call it something else…and well, make the last couple of changes that it needed to be its own unique entity. While I spent a solid week being kind of upset that it wasn’t a screen adaption of what I’d read, I have come to the acceptance that as its own film, it did some really amazing things and I do understand why so many people have given this amazing reviews. Now…where do I begin?

I think what I appreciated most about the film was that it kept the mood set by the book. It’s kind of dark and deep and quiet and makes you think. And while there are a few more jump scares, the story does come across as a slow burn with at first subtle references that not all is as it seems in Area X aka The Shimmer and that each character that enters it has a self-destructive secret. Having each of the lead female characters deal with some kind of depression or characteristic of ruination was an interesting twist. In the book, the title, “Annihilation”, is a reference to a code word that the psychologist uses to try and kill the biologist. (In the novel, the characters do not have names and there is a hypnotizing aspect that was unexplored in the film where the psychologist is able to control members of the expedition using these code words.)

The film was also acted incredibly well. Given there wasn’t much to go on for a few of the characters in the original material, the actresses and actors acted the hell out of every scene they were in. It goes without saying that Natalie Portman was incredible, but Jennifer Jason Leigh as the psychologist, Dr. Ventress, was probably one of the more interesting characters. She seems very removed from all that’s happening, even has kind of a lazy way of talking and it’s all because she’s kind of given up on everything. And, as much as I don’t understand the specific inclusion of a paramedic on a scientific research mission, Thorensen (played by Gina Rodriguez) was welcome as someone losing their sanity in a place that makes no sense.

The music, composed by Ben Salisbury, was ominous when it needed to be, heartfelt and a tour-de-force in the scenes that mattered most, notably during the discovery of Cass’s body, the climax of the film, and the ominous bear scene.

I saw this film with my boyfriend and incidentally ran into a few of his friends at the same show. By the end of it, we couldn’t stop talking about the film’s biggest best draw: skull bear. Skull bear terrified me. For several days, I couldn’t get the thing out of my head: a mutilated bear with a cry that mirror’s its victim’s dying screams. Good God. I don’t know who decided to add this thing to the film but…good on ya. Also, thanks for the nightmares. Hearing Sheppard’s screams coming from that thing’s mouth was absolutely bone-chilling and one of the best things about Annihilation. And being that skull bear doesn’t exist in the book, I thought it was a pretty awesome addition at that.

And now that we’ve covered that, it’s time to move onto..

The adultery subplot: I think it was intended to be the purpose for Kane leaving and going on the expedition. I think it was also supposed to be related to Lena’s self-destructive behavior. They explain in the plot (via the psychologist) that humans are drawn to self-destructive behavior, to try and upset harmony.  The adultery explains Kane leaving; it doesn’t explain why Lena engaged in that behavior in the first place. Trying to make the audience believe that she did it instinctively and without understanding is kind of bogus. Saying that every human being will try and corrupt their own happiness is a silly explanation for her behavior. Let’s be reasonable here. If they had given her just a little bit more characterization, said that she was bored, or that she was unhappy about some aspect of her relationship with her husband…or something.

In fact, the entire Lena saving Kane plot is unnecessary: In the book, Kane’s character is dead. The biologist does not go in to Area X to save him; she’s going in to understand what happened to him and reminisces about him in much the same way that Lena does in the film. I honestly didn’t think having him alive was an important aspect. It never felt like there as a clock ticking to find a cure for him. Very much the opposite in fact. Being that the plot and the film were slow burns, it really didn’t work to have that as her reason for going. That felt more thriller movie plot versus thoughtful, character driven sci-fi horror.

The Tower and the Crawler aren’t in the film: I think these are two of the biggest and most integral pieces of Vandermeer’s book. The Tower is this man-made structure, which essentially becomes a set of stairs that spiral down deep beneath the earth. At the bottom of those stairs is the Crawler, aka a monstrous entity that writes a message along the walls of the Tower and seems to have been consumed and changed by Area X. Reading further into the Southern Reach trilogy reveals the identity and origins of the Crawler as the keeper who was taking care of the lighthouse where the biologist finds all the journals. The Tower is something that prays on the biologist’s curiosity and ultimately brings her into confrontation with the Crawler in the climax of the novel. Which brings me to…

The Climax of the Film

I would have accepted this as the Crawler. This amorphous colorful ebbing blob floating in the air and emitting golden light would have been perfect and I could very well have gone along with a very H.P, Lovecraft ending in which she looks into it and sees the face of the lighthouse keeper or the psychologist, or something else and then runs off and escapes.

Instead of that, we got a purple extra-terrestrial who copies Natalie Portman’s movements in a stylized choreographed dance-like scene that stretches on for…a while.

One: the alien looked ridiculous. I’m sorry, but I wasn’t blown away by it. Area X is supposed to be refracting things like a mirror. Animals, plants, and people are integrating each other’s DNA into one another. The alligator with rows of teeth like a shark, the crazy ass dude in the swimming pool, the plants taking human shapes and SKULL BEAR. All of those things seemed like they took so much time to design and fabricate and they were all amazing. And in the climactic scene, we get someone in an iridescent full body suit…and that’s pretty much it. Yes, I get that it’s taken in some of Lena’s DNA and therefore, now looks human-esque. It can do that and still look more kick-ass than it did. Take crazy pool dude as an example. 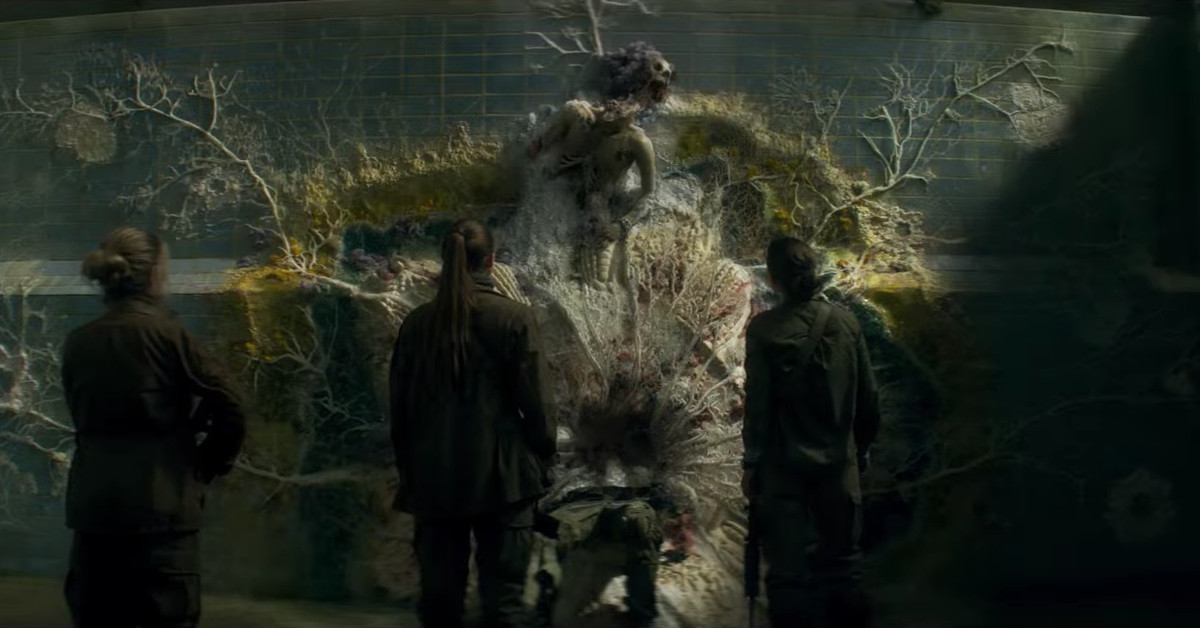 Two: The mimicking/fight/dance went on for far too long. By the time this thing was smooshing Natalie Portman into the lighthouse door, I was audibly sighing and asking myself when it would end. It was pretty clear what it was doing early on in the scene. It wasn’t going to let her leave, it was mirroring all her movements… Fine okay. I feel like half of that scene could have been devoted to plot resolution. We could have had some background into the extraterrestrial entity’s purpose for wanting to annihilate and change everything in Area X. Instead, we’re told ahead of time by the psychologist that those answers don’t matter or we don’t know them. Maybe not knowing was supposed to be scary, but I was just getting a sense of laziness.

And…that’s what I thought. I feel so conflicted with this film, probably more so than any other film I’ve seen recently. I did like it. It might not seem that way from how I reviewed it, but I did. And I did appreciate the creative license that Alex Garland took with a few things.

Still, I think my main problem with Garland’s Annihilation is its execution. I don’t like knowing that the director read the book once and then wrote the film without looking at it again, that he wanted to create something similar but…not true to the source material. I don’t like thinking that he didn’t find the book something he could translate to screen or even attempt to translate to screen. The book has a strange, psychedelic effect with things that are hard to imagine and describe. It’s definitely more contemplative and takes time to get going. But I so would have appreciated that attempt.

I have to assume the author is okay with the creative license taken on his work, being that he assisted in production of the film. Being a writer, I think it would be hard to make so many concessions on someone transforming your work for the screen. I know personally (if I were ever so lucky), I’d be very nervous if a director told me he wanted to take the concept of the novel and change the characters and the setting and the plot so that it barely recognized the source material. And I do understand that rewriting a book for screen is a difficult process and that books and movies are digested differently so, some of those changes need to happen. So many though?

What did you guys think? Did you enjoy Garland’s Annihilation? Did you read Vandermeer’s original novel or the entire Southern Reach trilogy? I confess I’ve only read the first and have been itching to read the second and third. Please comment and let me know what you thought of the differences between the book and the film.

Thanks and stay tuned!