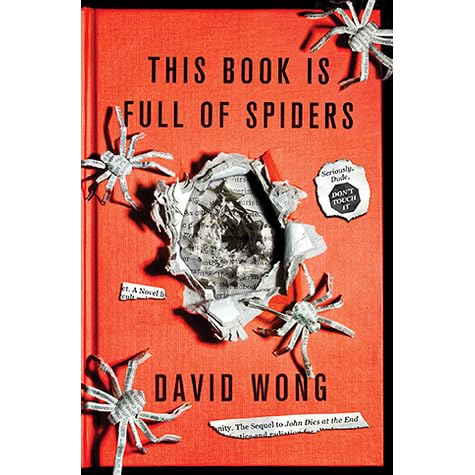 Oh my god. Wow. Where to begin?

My book tastes are all over the place. Of course,  most people know that my affinity is for the weird and wonderful: horror, fantasy, suspense, humor… you name it. If it has a unique voice, a plot that I can’t anticipate, and memorable characters, I’m onboard for sure.

My boyfriend recommended that I read the first book in David Wong’s trilogy, John Dies at the End, months ago before COVID quarantine officially began. My diligence at reading books has been pretty on and off. I can race through and love a book and then start another one soon after and take months to finish it. I’d like to say that work, owning a cat, writing, house chores, and all other aspects of my life get in the way of reading, but it’s a simply not true. I love reading. I don’t do enough of it. So, I chose to sit down with John Dies at the End over a month ago and read it.

It was nothing like I’d ever read before and I loved it.

Spoilers are probably ahead. Best be warned.

The premise of the first book goes something like this: David (who is the main character of the book and isn’t the real name of the author) sits down in an Asian restaurant to meet with a reporter and tell him all about the otherworldy adventures he and his best friend, John, have been on the last several years. David and John have a unique following as local celebrities, guys who investigate strange happenstances such as dead bodies coming back to life, frozen meat assembling itself in human form, floating dogs, and other such things.

David, who can be described as average with a dark past, single, working at a video store and often hanging out with his starving artist companion, John, isn’t someone you might initially root for. However, very quickly, you come to the understanding that this average Joe has somehow unwittingly gotten himself entangled in something much larger than the eye can see.

When it becomes clear that best friend and eternal jokester, John, has been exposed to some kind of animate, alien chemical (known between the two as Soy Sauce because of its appearance), David soon drops down a rabbit hole full of strange happenstances and weird characters. This ultimately ends with him finding love in a place he never imagined, owning a dog that always appears and disappears at will, and abilities from the soy sauce that transcend time and space.

Believe me, it’s a trippy book. While I liked the first book, I found that after I read the sequel, This Book is Full of Spiders, I enjoyed that one SO much more. I’ll explain why.

First of all, as an establishing novel, John Dies at the End does a lot of jumping around through time and space into dimensions. This ultimately gave me nightmares and had me concerned that the “shadow people” (main antagonists of the book) are pushing and pulling everything behind the scenes in our world to meet their ultimate mysterious goal. The leaping around fits that book because we have characters who, like us, are just getting used to the idea that nothing is as it seems and while the jumping around feels jarring, it simulates how John and David might be feeling as they pitch to and fro across the city of Undisclosed to Las Vegas and then to…well…who knows where.

This Book is Full of Spiders stays pretty well within the confines of Undisclosed, the city where David and John live which they won’t reveal the name of. The book picks up several months after the last one ended, with David still working his job at the video store, John still playing with his band, and Molly (the dog) staying with David. Amy is living at and attending college in a nearby town but frequently still visits David, their relationship as normal and happy as one would hope for. After an incident involving a crossbow and a pizza delivery guy, David is subjected to court appointed visits with a psychologist who only seems to piss off and annoy David further.

One night while David is sleeping, he is attacked by a spider-like creature which has infiltrated his bedroom. In a hilarious and rapid tumble of circumstances, both John and David realize that the spider is only just the beginning of their problems. When a police officer shows up to investigate the chaos that David’s fight with the spider caused, he’s attacked and possessed by the escaped arachnid. This unfolds into the most terrifying series of circumstances Undisclosed has ever seen.

I’m just going to say it. The spiders crawl into your mouth and possess you. Terrifying as f-. When the spiders begin to multiply and escape, the entire city of Undisclosed is immediately quarantined and John and David are separated. John, having escaped quarantine finds Amy, who is on her way into Undisclosed to visit David. David has been captured and placed in isolation under the assumption that he is infected.

The best part of this book for me was splitting up the dream team. All of these characters are phenomenal together. Seeing what happens to them apart and getting a more in depth view at what their characters do alone was awesome.

John, who was a supporting character in the first book, known for his crazy antics, his inability to take things seriously, and his amazing one-liners, became a much more interesting character for me when put on his own and put in charge. There’s this love for his friend, David, that was always understood in the first book, but rarely talked about. I so enjoyed seeing John worry about David, seeing him actually care and feel useless about being able to help him. It’s a side to the character we never saw in book 1.

Amy was also portrayed wonderfully in this book. I’m not going to shout “girl power” from the hills, but I liked that she had gumption, that she had motivation and was extremely believable in her capabilities and actions.

Even, the dog had her own chapters. Molly was, I think, the best part of this book.

Seeing how all of these characters are split apart and work so hard to reunite was what made me love this book. You do have to read John Dies at the End to be introduced to and understand the complexities of their relationships. But damn. What a triumphant book. If you are a fan of zombie fiction, body horror, weird stuff, and you love dogs, please pick this up. You won’t regret it.