I had to obey my inner voice this week. It told me that I had a craving for eggplant (probably the first time that’s ever happened) and that I should find a scrumptious recipe to tackle for this week’s Literary Cooking Adventure. As such, I found a terrific one for some Eggplant Parmesan Boats, which were relatively easy to make and tasted SO GOOD!

Alas, the gift of obeying does not come without its share of frustration, as protagonist Ella found out in Gail Carson Levine’s “Ella Enchanted”. Renegade eggplant escapees, a dastardly onion that refused to be cut, and a pretty bad breakdown while trying to film the intro to the video are only a few of the things that went wrong.

Want to make this spectacular dish for yourself? BEHOLD! Scroll down to find the ingredients and directions!

END_OF_DOCUMENT_TOKEN_TO_BE_REPLACED 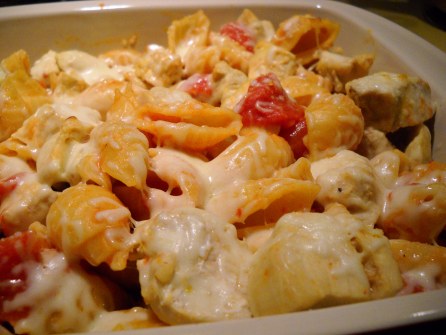 You’re probably not going to believe me when I say this but…it actually looks better than it tastes. To most of you, this just crushed some kind of pasta food-baby you were hoping to nurture in the future and I apologize for that. I should also add that I didn’t exactly follow the directions to the letter. I have a feeling though (and this is just my opinion) that this recipe would have turned out badly even if I had followed them. It’s one of those recipes that you desperately don’t want to mess up because it looks so scrumptious…and also because you’re making so damn much of it. End result: I have a ton of this stuff and I can barely force it past my lips half the time. Still probably have enough for two meals in my fridge. Urgh…

END_OF_DOCUMENT_TOKEN_TO_BE_REPLACED

Well, that settles it, I guess. I really am a moron when it comes to following directions. I always think I’m doing something the right way until I try to get creative (or I become bored) and I switch them up… and then everything goes to hell. Now, mind you, I have made Fettuccine Alfredo before. Technically, I cheated by using the little packets at the grocery store for the sauce but it was still edible. And I’ve made it numerous times with chicken and shrimp. But I failed here… badly. It pains me because this comes just after last week’s mega success of the bread pudding which I’ve pretty much adopted as the only dish that I can make well. I made it again for Father’s Day. And I had another victory there. My nephew and niece absolutely loved it! And both of them are picky eaters! Sadly, I know if they’d taken even one look at my fettuccine alfredo, they’d have run a city block to get away from it.