In my mind, fall begins far before the official autumn solstice date late in the month of September. I celebrate my birthday at the end of August, usually doing something that I haven’t had the chance to do all summer long, and then…fall is here, to me anyway. The time between the end of August til the end of November is my time to party, to look forward to all the crafts I’ve been cataloging to do at a later date, to bake a ridiculous number of things… This is my favorite season. Which means more Cooking Adventures for you guys. Oh yeah. Celebration.

I’ve been quite bad with keeping up on blogs this summer. I don’t want to give excuses about work, and writing deadlines and such but that’s really what it all boils down to. And this autumn isn’t going to be any less busy for me. But, now that it isn’t five million degrees outside and a cool breeze blows through the window in my kitchen door, I feel justified in baking and cooking more often now. This season’s baking begins with a stellar recipe for a peach pie that I found from Two Peas & Their Pod. I’m a bit of a pie fiend and I wanted to attempt a fruit pie that I had never tried before. This did end up being more of a cooking “frolic” as it wasn’t very involved, but it was still very fun to make.

On a particularly sunny and breezy Monday afternoon, I found myself in the kitchen with the recipe and a two hour block of free time (something that almost never happens). Having already decided to make the pie, I thought that it might be fun to listen to an audiobook while I cooked. Opening up Spotify, I decided to try some old Edgar Allan Poe, someone whose writing I haven’t actually read. (You may be wondering how a writer of dark fiction hasn’t read anything by Poe–believe me, it’s been on my list of books to read. I pulled up “The Oblique Box” and started in on the recipe.

First off, the original recipe has a homemade crust which undoubtedly makes this recipe 10x more fabulous. Unfortunately, I didn’t tackle it for my incarnation of their glorious recipe. Why you may ask? Because when it comes to rolling out any kind of dough, I’m the worst at it. It also doesn’t help that my rolling pin is broken (which happened on another Cooking Adventure) nor that I have the counter space equivalent to a grapefruit. Hardly any whatsoever.  It’s as if all the bottles of oil, the recipe box, the appliances…they’ve begun to slowly consume any and all horizontal space left between my refrigerator and my stove. Basically, this crude diagram of a glacier shows you what I’m dealing with. 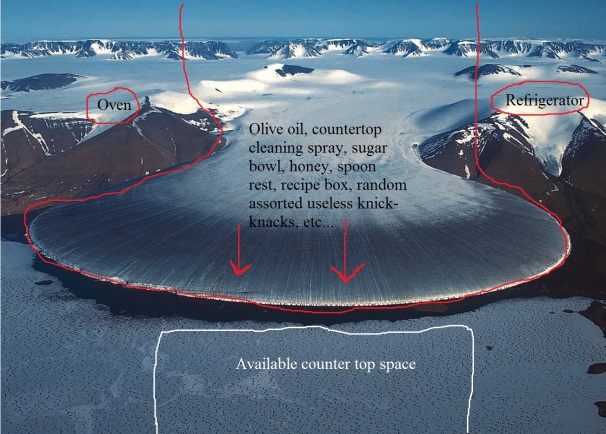 In this pathetic little modicum of space, I was expected to roll out a pie crust with a rolling pin that exceeds the width of that space. I wish I was joking. I decided to play things safe and just use pie crust from the store.

I pulled my peaches from the fridge and started the laborious task of peeling them with a vegetable peeler. This was, of course, punctuated by screaming from the Edgar Allan Poe story which made me suddenly feel like I was torturing the things. The peaches I used were still a little hard but I like that because the slices kept their shape better and didn’t turn into a messy pile of goo in my hands. As I peeled, the pieces of peach fuzz flew about the kitchen, not landing in the intended destination of the garbage. My cat was, of course, right there at my feet trying to devour each piece that landed out of bounds.

By the time I’d finished peeling and cutting three peaches, “The Oblique Box” had ended and the famous story of “The Pit and the Pendulum” began, narrated by none other than Vincent Pryce. However, before I could even be treated to the story, I was forced to listen to an old 1957 radio advertisement for cigarettes. Apparently, back then, all they felt they needed to do was scream something through a megaphone repeatedly in order to tell you of the items new features. Kent’s claim to fame? Their “micronite” filter (which I discovered later was reported to contain asbestos). According to this old tv ad, entire towns smoked Kent cigarettes simultaneously.

I’d be a bit wary of the smoking fireman though. He doesn’t seem to have his priorities in order…

After being beat over the head several times with the “KENT FILTERS BEST!” declaration, I moved onto adding the necessary spices into my peaches. 1/2 cup granulated sugar, 1 tsp. ground cinnamon, 1/4 cup ground nutmeg, 3 tbsp. cornstarch (you can use 4 if your peaches are really juicy), and 1/2 tsp. vanilla extract. As I took the bowl into the other room and stirred all of the contents together, the dark and sinister nature of “The Pit and the Pendulum” was once again interrupted by yet another cheery vintage advertisement. Imagine going from Vincent Price, talking about a guy who has just been sentenced to death by the Spanish Inquisition, to an even creepier baritone announcer telling you that the SUSPENSE radio show will return in a moment. “But, first, a big announcement…” Which then segues into this:

I had to stop the music track because I was laughing so hard. I’m pretty sure that was the 1950’s version of us being engrossed in an episode of American Horror Story and then  having a commercial for Polident viciously cut into the tension.

Rolling the pie crust over the top of the pie and cut some slits in the top for ventilation. The original recipe does a lattice style pie crust but after having done that on my last apple pie recipe, I decided that I wanted to keep most of the crust intact. (I was being super lazy.The lattice does look pretty though!) I crimped the edges of the two pie crusts together and then shoved the pie dish in the oven at 400 for 45 minutes. Because my oven runs hot, I had to move the pie to a lower rack after about 25 minutes because it was already browning.

The Poe story had ended by the time the pie was ready to come out, although the story’s dim mood and wonderful atmosphere was once again thwarted in the middle, this time by a commercial for Ex-lax. Just what I wanted to think about while baking, right? I pulled the pie out of the oven. Immediately, a fusion of autumnal spices overtook the small area. Finally, all of my senses were engaged with the idea that it was fall and that it could only get better from here on out. I brought the pie to my parent’s house for dinner and both loved it, even asking for some pieces to eat for breakfast. That’s exactly how I like my pie. ‘Tis the breakfast of champions.